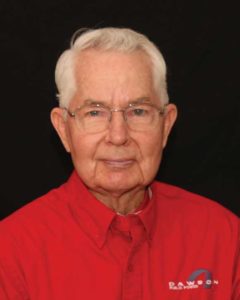 July 2021
Paul Neil is described by his colleagues as a public power advocate, whose dedication was oftentimes unsurpassed. In May, he retired after 48 years of service as a board member representing customers in the Dawson Division.
“Public power is an example of rural people identifying problems that affect the majority and then banding together,” Paul said. “Public power’s goals are to continue to be not-for-profit while safely offering the lowest cost of service possible using sound business practices and reliable resources.”
Paul farmed near Cozad in rural Dawson County. He had not considered running for a seat on Dawson PPD’s Board of Directors until 1973.
“I was asked to interview to replace a retiring member’s seat,” he said. “I told them no; I didn’t have time. The next meeting, I got a letter saying that I had been appointed to the Dawson PPD Board of Directors and I was to show up at the meetings from then on.”
He immediately immersed himself in the public power industry, seeking a better understanding of electricity, legislation and how to best serve the consumers who officially voted him on the board.
[su_pullquote align=”right”]Public power is an example of rural people identifying problems that affect the majority and then banding together. [/su_pullquote]Paul served as the Dawson PPD Board President from 1995-2019, often mentoring others on the board and Dawson PPD staff. In a 2012 award presentation, he was described as “a strong local leader who comes to meetings prepared, knowledgeable and ready to offer his insights and work toward a satisfactory solution.”
His favorite memory was when the new Lexington headquarters was built. “We did it without major cost increases associated with delays,” he said.
Paul’s willingness to oversee and call for change extended beyond Dawson PPD’s boundaries.
Paul held every board officer position at the Nebraska Rural Electric Association and served as its president in 1988 and 1989. He was elected to the Mid-West Electric Consumers Association Board of Directors in 1980. There, Paul served as an officer and eventually as president from 1994-1995.
At the national level, Paul served on the National Rural Electric Cooperative Association Legislative Committee and the Cooperative Management, Employment and Community Committee.
When looking at the future, Paul sees some obstacles that Dawson PPD’s Board and the public power industry will need to overcome.
“Since the start of the pandemic, the industry of ‘talking heads and political experts’ has exponentially exploded. They will be a problem,” he cautioned. “Dawson PPD needs to guard its credibility at all costs. It alone won’t save us, but without it we won’t get on first base.”
“On the business side, new technology has a shorter depreciation time,” Paul commented. “Dawson PPD needs to get this paid for before it is obsolete.”
Paul’s wisdom will be missed in the board room, at Dawson PPD employee safety meetings and at statewide and nationwide industry meetings.
“My heart felt thanks and credit belongs to all those around me over the years that helped and let me do my job.”