Between the lines: Our loss is your gain 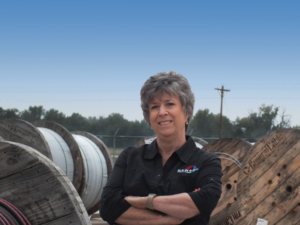 The unusually wet years of 2018 and 2019 have impacted many customers and public power districts. Some of our farmers and ranchers experienced unusual issues of their own due to the rains.
If there is a silver lining anywhere, it is for farmers who didn’t need to irrigate crops. That saved them money on energy costs. Granted, some crops received water they didn’t want or need from Mother Nature.

The USDA released information on September 12, 2019, that says, “Based on September 1 conditions, Nebraska’s 2019 corn crop is a record forecast at 1.79 billion bushels, up slightly from last year’s production.” Soybean production looks to be down 14 percent and the area for harvest, at 4.95 million acres, is down 12 percent from 2018. For the full report, please visit this link: https://www.nass.usda.gov/Newsroom/Executive_Briefings/2019/09-12-2019.pdf

Normally, irrigation season is our peak time for energy sales. This year’s above average precipitation has resulted in decreased irrigation energy usage. 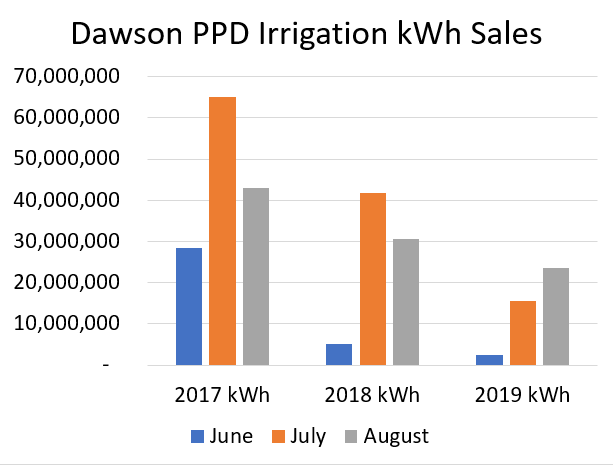 Dawson PPD’s irrigation energy sales for June, July and August of 2019 were about a third of the District’s 10-year average for those months. Kilowatt hour sales in 2018 were down as well.

Irrigators have the option to participate in a load management program. It offers lower rates to customers who let the district turn irrigation systems off during certain hours. The program is administered by Nebraska Public Power District, Dawson PPD’s wholesale power provider. The goal is to limit the demand for power at certain times of the day. In 2017, Dawson PPD controlled irrigation load for 146 hours of the irrigation season. In 2018, there were only 26.5 hours of control. In 2019, there were just 16 controlled hours. The decreased load control is due, in part, to reduced electric irrigation load across much of the state.

This irrigation season will certainly go down in the record books. However, the overall impact on our annual electric sales is not completely known at this time.

Historically, irrigation makes up about a third of our total revenue. Make no mistake, this has been a very challenging year for Dawson PPD. A few columns ago, I mentioned that we set our budget in October based on projected revenue to cover typical expenses and some construction projects. Our revenue projections for 2018 and 2019 were based on normal sales, however that’s not what we are experiencing. One unusual year isn’t normally followed by a worse one.

Recently I heard a speaker say that 2020 is projected to be another wet year for Nebraska. While I’d like to be optimistic that the weather will go back to normal, we’ll believe him and budget accordingly.