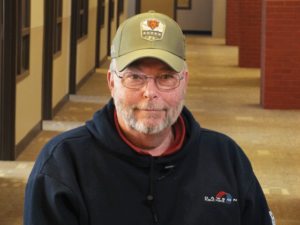 Ron Teten is a real legend. For the past 19 years, Teten has led Dawson PPD into the world of intelligent, digital mapping. His next destination? Retirement.

“It’s been a good learning experience at Dawson PPD,” Teten said. “I’ve enjoyed working with the employees. Dawson PPD is a great place to work.”

“I worked for Dawson County as a surveyor for 25 years,” Teten said. “When this position opened up, Dave Dobbins (now retired Dawson PPD Consumer Staking Engineer) told me about it.”

“In 2001, all of Dawson PPD’s maps of its transmission and distribution lines were on paper or were basically an image of a map on the computer. The linemen had to carry large map books with them in their trucks. About one or two years later, the maps became smart.”

The new technology is called Manifold System and is “something we can’t live without.”

“It was a learning curve for both the Engineering Department and the Operations department, but we figured it out,” Teten said. “The GIS system was my baby. It was handed to me and I was asked to run with it.”

An event that will forever stand out in Teten’s career at Dawson PPD was the ice storms of 2006-2007.

“I’ve never seen so many poles flattened on the ground and ice that thick,” he said. “I just couldn’t believe it. I remember the long hours employees put in just to get the power back on.”

Now retired, Teten has set his compass to adventure. He and his wife plan to take their camper on trips in the near future.

From all of us at Dawson PPD, we wish Ron an enjoyable retirement.