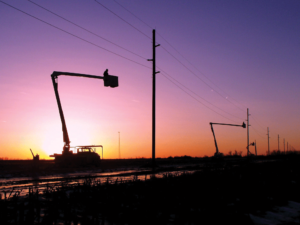 A time to reflect on how Dawson PPD works for you – the public – not stockholders. Public power works. Public power gives back. Public power cares.
Across the U.S., more than 2,000 public power districts bring electric power to homes, businesses and streets. Public power is a community-owned utility that the local government runs, just like it does its schools and libraries.
Each public power utility is different, reflecting its hometown values and characteristics, but all have a common purpose: providing safe, reliable electricity at a reasonable price. At its heart, public power is all about hometown decision making that puts customers first — because it is not-for-profit. Community members have a direct and powerful voice in utility decision making.

How does it work?

Public power has survived and thrived in America for well over a century. Citizen-owned public power utilities first appeared more than 100 years ago when communities created electric utilities to provide light and power to their citizens.
Did you know that Senator George W. Norris of McCook authored the Rural Electrification Act? Signed by President Franklin D. Roosevelt on May 11, 1936, this act provided federal loans for installation of electrical distribution systems to serve rural areas and established the Rural Electrification Administration.
The number of public power utilities has grown from fewer than a dozen in 1890 to nearly 2,000 today. While many utilities were sold to large corporations during the 20th century, others chose instead to preserve community ownership and local control of power supply.

How do we give back?

Public power utilities have no stockholders and are driven by the singular mission to serve their customers. They measure success by how much money stays within the community through low rates and contributions to the city and town general funds, not by how much profit goes to often remote stockholders. There are no divided loyalties. Dawson PPD reinvests into its distribution system to ensure reliable electrical power for all of its customers.

How do we care?

Neighbors look out for each other. That’s the power of community — and the strength of public power. Public power utilities send line crews and trucks to help their neighboring utilities (and even utilities that are many states away) restore electric service after a weather event. The employees are involved in your community, often volunteering on boards or fire departments.
Public power makes a difference, every day.