Ghost Towns: A look at the past 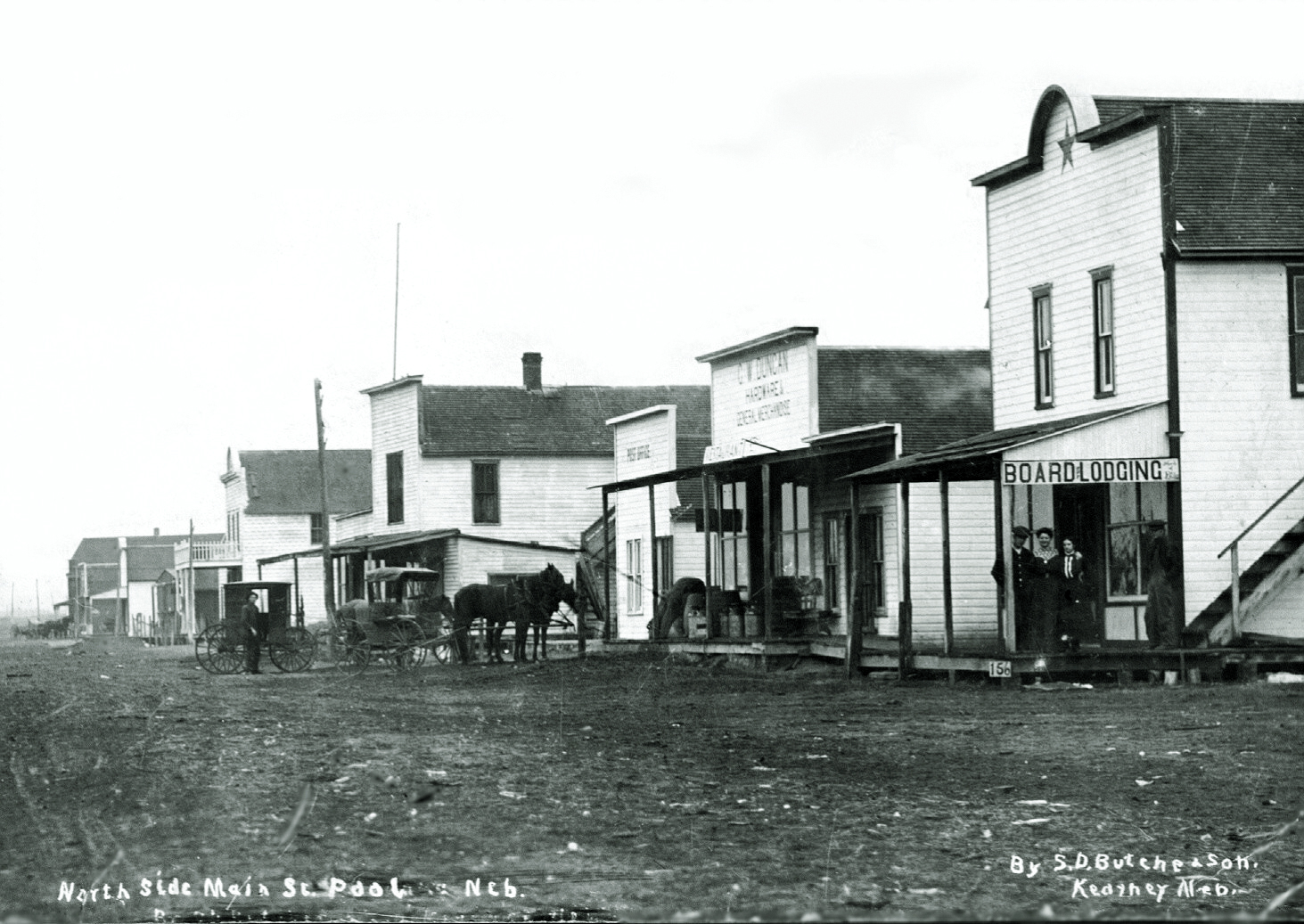 Buda holds the distinction of being the oldest town in the county. The town was originally named Kearney. In 1872, the name was changed to Shelby because of its similarity to Kearney Junction, a town five miles distant. Later, a station in the eastern part of the county was named Shelton and, because there was confusion of freight shipments, the town of Shelby again changed its name. This time it was called Buda.
In 1915, Buda’s school organized the first 4-H horse and colt club in the nation.

The name is after a former owner of the site and a pioneer of the neighborhood, Francis Marion Denman, a Civil War veteran.

In 1881, Sylvester Bearss constructed Blue Mills just east of the Wood River. Fifty barrels of flour could be produced every 24 hours.
When the mill was rebuilt after burning in 1892, a concrete dam and steam engine were installed. From about 1908 to 1920 Sylvester’s son Guy Bearss owned the mill, which featured “Star Patent” and “Snow Flake” brand flour.
Bearss sold the mill to Warren Ewell a few months before it was again destroyed by fire on October 31, 1920. Ewell was convicted of arson; the mill was not rebuilt.

The town was originally named Crowellton after Daniel A. and D. Allen Crowell, who were homestead settlers in the vicinity in 1871. There was some confusion in mail, however, because of the similarity of the names Crowellton and Carrolton. In the winter of 1873-1874, the citizens met at the home of Mr. and Mrs. Theodore Knox and selected the name Odessa from Odessa, Kherson, the city by the Black Sea.

This town was established in 1892 under the name of Poole Siding which later was shortened to Poole. Both names were given the town in honor of W. W. Poole who came to the vicinity and started a ranch in 1876.
In 1879, Mr. Pool formed the Nebraska Land and Cattle Company. When the Union Pacific Railroad laid its tracks up the South Loup, Pool Siding was made a shipping point for the Nebraska Land and Cattle Company. It later dissolved and Mr. Pool started the Buffalo County Cattle Company in 1894.
Like so many, Mr. Pool had financial problems. The Buffalo County Cattle Company was a failure and he had other debts. Then his health began to fail, and he was driven to the point of despair and shot himself to death. About two weeks later, his grief-stricken widow, Eva, who was pregnant, went into premature labor and never survived. This tragedy almost brought about the end of Poole Siding.
The town site of Poole Siding was sold at public auction in the summer of 1900, and the post office closed. However, in 1901, parcels of the town site were sold and stores moved back. The post office reopened and the community began to function as a fully developed town.
Poole was incorporated in 1910 and in the 1920s the town reached its peak population of 337. The school closed in 1966 and in 1972 the town became unincorporated.

Prairie Center is an unincorporated community in Buffalo County. A post office was established at Prairie Center in 1874 and remained in operation until it was discontinued in 1902.

Saint Michael was established by the Lincoln Land Company in 1886. An Irishman named Mike Kyne owned the land on which the town is located. He sold the land to the company on the condition that the town would be named Saint Michael.

The community’s name was coined by Mr. John Swenson, a homestead settler in the county in 1874. Swenson aimed to form a name which was euphonious in sound and which no tongue could mispronounce.

Sodtown was a cluster of hastily erected, crudely fashioned sod buildings at the crossroads of four section corners in Cherry Creek Township, and became the first thriving settlement in the northeast corner of Buffalo County in 1879.
Sodtown was known for the Sodtown Telephone Company. The company began in 1904 with two farmers using barb wire fence telephone line. At its peak, the Sodtown Telephone Company had 130 telephones.

The community was named for a spring noted by pioneers for its clean drinking water. The fictional community of Sweet Water in Willa Cather’s novel, A Lost Lady, may be inspired by the town. Sweetwater is also the setting for the TV show, “The Young Riders.”

A post office was established at Buffalo in 1896, and remained in operation until it was discontinued in 1957. The town of Buffalo is named because of its location on Buffalo Creek.

This place was named after George B. Darr, owner of the site. A post office was established at Darr in 1902, and remained in operation until it was discontinued in 1923.

This village was named after an official of the Union Pacific railroad, S. T. Josselyn, paymaster, Omaha, Nebraska. A post office was established at Josselyn in 1898, but it was discontinued in 1900.

The town was named after a large island, ten miles long and one mile wide, located directly south of the townsite. Before the advent of prairie fires, the island was a wilderness of willows. A post office was established at Willow Island in 1874 and closed in 1991.

A post office was established at Bignell in 1908, and remained in operation until it was discontinued in 1933. The community was named for E. C. Bignell, a railroad official.

A post office was established at Birdwood in 1888, and remained in operation until it was discontinued in 1896. The community was named from the Birdwood Creek nearby.

During World War II, Dickens had about 200 residents. There were two isolated practice bombing targets in the same general area. To simulate nighttime bombing, there were mobile lights at the targets to assist the bomber crews in finding them. The towns in central Nebraska did not have to adhere to the lights out conditions since they were not under any eminent threat of an attack. It would be easy to confuse the community’s street lights as a target.
Some time in December 1942 or 1943, a four-engine bomber dropped five, 100 lb. practice bombs upon the town of Dickens.
One bomb went through the roof of the lumber company, another behind the grocery store, one behind a bank and two more in an alley. Another five bombs were dropped and landed in a field east of town.
Upon investigation, it was learned that the three lights illuminating Main Street were arranged in a similar fashion to three lights set up around the actual target.

In 1886, the Chicago, Burlington and Quincy Railroad established Ingham between the small villages of Farnam and Moorefield.
Later, Ingham became a trading center for the small dryland farms and cattle ranches in the area. Silica, used chiefly in scouring powder, was mined, refined and shipped by rail.
During the late 1920s and 1930s, Ingham’s fortunes began to decline. Improved roads enabled the dwindling number of area residents to shop and market their grain and cattle in larger communities. In 1928, the silica mill was moved to Eustis. By the early 1950s, Ingham had become a memory.

O’Fallons was named from the O’Fallons Bluff nearby. The community was a junction point on the Union Pacific railroad.

Somerset was likely named after the town of Somerset, Massachusetts. A post office was established at Somerset in 1887, and remained in operation until it was discontinued in 1944.