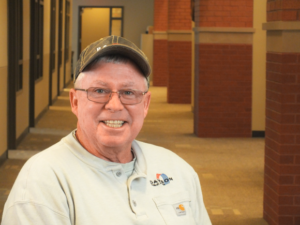 Martie Jones has spent 36 years working for Dawson Public Power District. A Chief Area Serviceman for the Ravenna Service Center, he’s seen the utility grow and change through the years. Now, it’s his turn for a change.

Jones officially retired in early January 2020. A graduate from Chadron State College with a Bachelor’s Degree in Industrial Management, his first job was with the City of North Platte. He was a staking engineer, and after about a year, he sought change.

“I wanted to pursue a career in the electric field, and I decided to become a lineman,” Jones said. “The challenge was always there, like the weather. You feel proud when the lights come back on after a power outage (caused by weather). It feels like you accomplished something.”

He completed his utility line degree from Northeast Community College in Norfolk and returned to the City of North Platte. There, he was hired as a lineman on the construction crew. Still, Jones sought change.

He learned that there was an opening for a maintenance lineman at Dawson PPD in Kearney and started in 1984.

“We had a roller shade mounted above the visor in our trucks. When you pulled the blind down, you’d see a printed map of our service territory,” he said with a knowing smile. “You really had to lean back in your seat to see what you were looking at. We just taped the maps onto the blind so we could easily swap them out. Today, we have laptops in our trucks. Technology has certainly changed how we work.”

In 2012, Jones accepted the position of Chief Area Serviceman at the Ravenna Service Center.

“Being a lineman is a job that I truly enjoy,” he said. “Personally, I don’t think I could work for a better company.”

With retirement in full swing, Jones looks forward to the change.

“I need to spend more time with my family, and I plan to do more of that,” he said. “I might do a little salmon fishing at Lake Michigan, too.”

Congratulations, Martie, on your retirement!